Estimation of the support required to stabilize a tunnel excavation, especially in the vicinity of the face, is essentially a four-dimensional problem. Time-dependent weakening of the rock will compound the three-dimensional redistribution of forces around the excavation. Given these constraints, it is valuable to have a general but still relatively simplified appreciation of the nature of the interaction between the rock-mass and the installed support. The Convergence-Confinement method has been developed for this exact need.

The Convergence-Confinement Method is a basic and commonly used tool for underground support structures in conventional tunneling during the preliminary stage of design. It was initially an analytical method for circular tunnels. Based on the analysis of stresses and strains around a tunnel, the Convergence-Confinement Method provides an insight into the interaction between the support and the ground by means of a plane-strain model of the tunnel excavation. It provides meaningful numerical results in a 2D analysis framework.

The Convergence-Confinement Method is a procedure that allows the load imposed on a support installed behind the face of a tunnel to be estimated. When a section of support is installed in the immediate vicinity of the tunnel face, it does not carry the full load to which it will be eventually subjected. A part of the load that is redistributed around the excavation is carried by the face itself. As the tunnel and face advance (i.e., away from the installed support), this ”face effect” decreases, and the support must carry a greater proportion of the load that the face had carried earlier. When the face has moved well away from the support in question, it effectively carries the entire design load.

Figure 1: Loading of the support at section A-A' due to progressive advance of the tunnel face (after Carranza and Fairhurst, 2000). 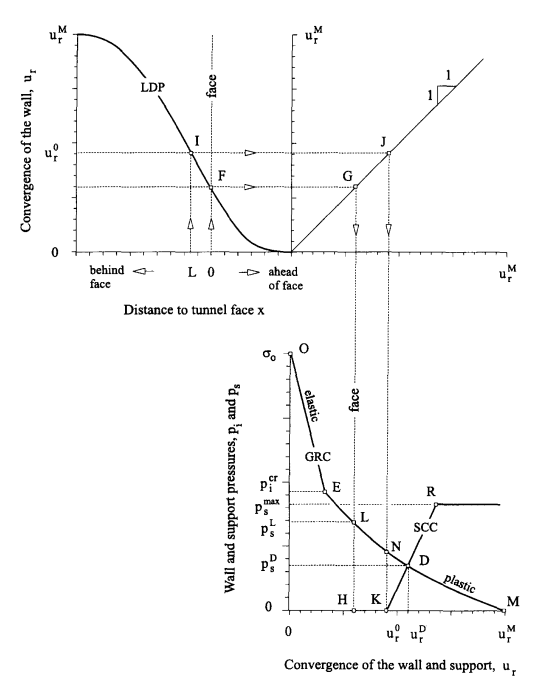 As can be seen from Figure 1, the determination of the load transferred to the support requires an analysis of the interaction of the load-deformation characteristics of the elements comprising the system:

As illustrated in Figure 2, the three basic components of the Convergence-Confinement Method are therefore:

The LDP is the graphical representation of the radial displacement that occurs along the axis of an unsupported excavation – for sections located ahead of and behind the face. It enables the user to determine the amount of radial displacement that will take place at the tunnel boundary (and corresponding amount of rock stress release) before the installation (and therefore associated loading) of stiff support will take place.

LDP is used to calibrate the staged plane strain 2D model in which the inner tunnel core will be replaced by incrementally relaxing boundary tractions to simulate a progressive reduction of a “fictitious” internal support pressure 𝑝𝑓 applied at the tunnel wall:

where 𝜎0 is the initial stress state and 𝜆 is the deconfining rate.

For uniform or isotropic initial stress conditions and circular tunnel cross-sections, the LDP can be calculated using axisymmetric models or analytical formulas as introduced by Panet (1995). However, for most situations (anisotropic state of stresses, non-circular tunnel cross-section, etc.), three-dimensional analyses will provide the most accurate LDP curves (see Figure 3).

Figure 3: Use of PLAXIS 3D numerical analysis for the obtention of the LCD for a horseshoe tunnel.

Such analyses could advantageously be set up using the PLAXIS Tunnel Designer functionality to ease the creation of the 3D geometry from a simple 2D cross-section definition and speed up construction stage setup where the incremental tunnel construction process must be accurately taken into consideration.

The Ground Reaction Curve can simply be obtained by running a PLAXIS 2D plane strain analysis with the consideration of a full tunnel excavation without any means of support. Such analysis will enable the monitoring of the tunnel wall radial displacement versus the staged construction multiplier

(which in that case exactly equals the deconfinement rate 𝜆) as illustrated in Figure 4. 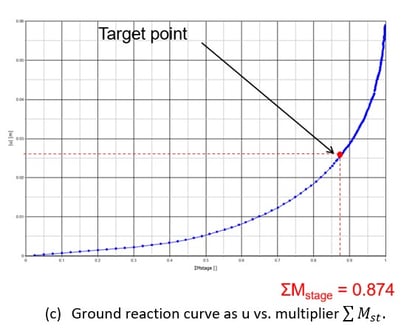 Figure 4: PLAXIS 2D for the determination of the Ground Reaction Curve. 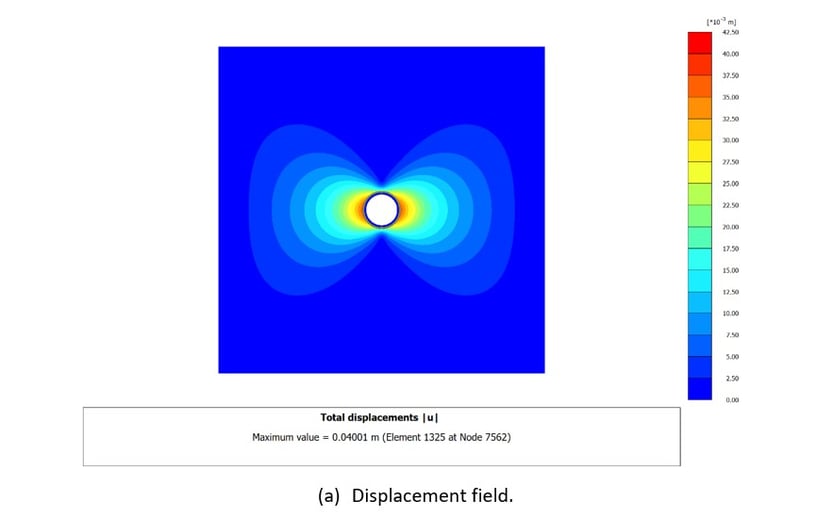 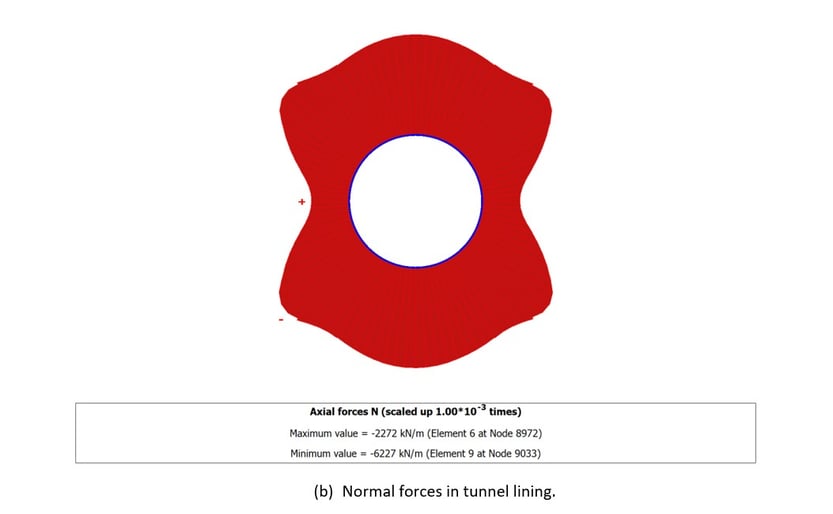 The obtained GRC will then be used to evaluate the equivalent deconfinement level that will provide the same radial tunnel wall displacement as given by the LDP at a distance L from the front tail where the support is meant to be activated.

The Support Characteristic Curve will be implicitly provided in a separate and similar 2D plane strain analysis with the additional activation of the tunnel support at the appropriate level of confinement found during previous analysis (as deduced in Figure 4c). An example of such type of 2D analyses is presented in Figure 5.