Garbage In – Garbage Out

Recently, we’ve had some discussion on our Bentley’s Hydraulics and Hydrology communities forum on fixing a model where the piping at intersections was poorly represented.

It was difficult to determine if the pipes were connected at a cross fitting or crossed over/under one another. (The link to our forums is below.)

The problem was that the people who developed the data underlying the GIS/CAD (I’ll call it GIS in this blog) used to build the model were not careful in how they laid out intersections. They would run the same pipe down several blocks without consideration of whether crossing pipes were interconnected. While we have tools in our model to clean up these issues (View > Network Navigator), it is best to avoid them from the start. 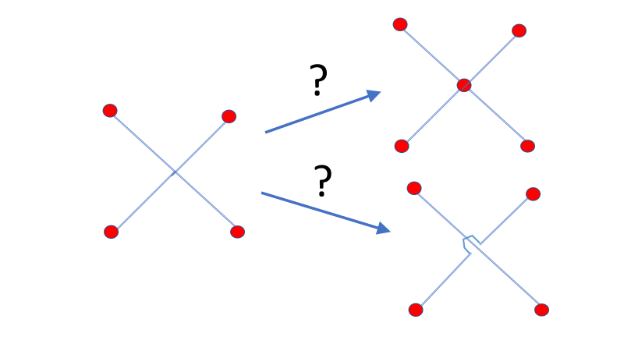 The problem here has been caused by the GIS data source. So that is where the user should fix it. In that way, when they go back to the source file to update the model, it will be correct.
If the GIS was drawn simply to be a map, then connectivity at intersections is not very important, and the drafting person can be careless. With modeling, connectivity at intersections is critical. The GIS needs to get connectivity right. So, I would correct the GIS and rebuild the model. Everyone will be better off in the long run.

If the problem is due to poor organizational standards for the GIS, they need to be corrected. If the problem is caused by a careless drafting person, here’s a possible solution. Get a piece of PVC pipe, roughly 1-inch diameter and 3 ft long. Walk up behind the careless worker and start beating that person with the pipe until the individual’s work quality improves. (Warning: this practice might be frowned upon in some jurisdictions.)

If that won’t work, it’s important for the modeler to work with the GIS team when the GIS is being created to ensure they have good work processes with regard to connectivity. This may slow some of the drafting, but as one of my associates has said, “Start fast, finish slow.”

Another issue that arises frequently is whether it is good to split a pipe at a gate valve to create two pipes. From a modeling standpoint, this is inefficient since it doubles the model size and run-time. My preference would be to put the normally open gate valves on their own layer and bring them in as WaterGEMS isolation valves (ISO elements). In this way, they are ignored for most hydraulic calculations but can be used for things like shutdowns, criticality, and segmentation.

In many cases, however, the pipes are already split into two by a valve element, usually a throttling control valve (TCV) in the GIS. In these cases, we have a tool in our Skelebrator toolbox that can convert normally open TCVs into ISO elements, and our GIS ID property can keep track of which two original pipes make up the new single pipe. The tool under Skelebrator is called “Inline Isolating Valve Replacement.”

One pipe with isolation valve vs. two pipes with throttling control valve

The bottom line is that the best way to correct model problems caused by shortcomings in the GIS is to correct them in the GIS. Once a good workflow is developed, it will make everyone’s life better.

Water Distribution Modeling History – How did we get here?

While other people have hobbies like fishing and golf, one of my hobbies is learning about the...

Think about the plumbing in your house. If you want to make any changes to the piping, you need to...