Rock engineering projects can be fascinating. Engineers working on rock need to design solutions that mobilize the natural strength of complex, largely unknown rock masses, which often play the roles of both loading and engineering material.

The Rock Your Analysis with PLAXIS series will discuss rock engineering applications, their challenges, and the resources that numerical modelers and geotechnical engineers can use to solve these problems by using PLAXIS geotechnical analysis software.

This first article will briefly introduce some of the topics in the series, which will be expanded upon in upcoming blog posts and webinars:

At some scale, all rock is fractured. Rock masses contain fractures of many sizes, which may include joints, bedding planes, schistosity planes, shear zones, and faults. These discontinuities naturally have an influence on the mechanical behavior of the rock mass, but their effect will vary depending on the relative scale of the discontinuities with respect to the dimensions of the mechanical problem. This is captured by the concept of ”representative volume element” (RVE), which leads to several modeling approaches:

In practice, continuum and equivalent continuum approaches are usually discussed together, with the ”equivalent” modifier often omitted, since the only difference between the two lies in the selection of material parameters, either to represent the rock mass or the intact rock material.

An overview of equivalent continuum constitutive models for rock was given in a previous series dedicated to soil and rock models. Those most prominent include:

In PLAXIS geotechnical analysis software, explicit discontinuities have traditionally been modelled through Interface elements. The new Discontinuity elements, introduced in Version 22 (2D only), enable a simpler modelling workflow. These are line (2D) or surface (3D) elements that decouple the nodes in the mesh, enabling the relative displacement between the two faces of the discontinuity, which are linked by a set of independent springs for which normal (kn) and shear (ks) stiffnesses can be specified. Finite element (FE) models with embedded discontinuities are still based on a continuum numerical framework and only enable small relative displacements. They cannot be used to model new contacts or the complete detachment of blocks.

Working with brittle materials entails the risk of sudden failure. Most engineers are wisely told to avoid them in favor of ductile alternatives, but this is almost never an option in geotechnics. We must then find other ways to manage this risk.

A paradox in rock mechanics is that higher quality rocks are also more brittle. This partially negates the benefits of their higher strength. It also means that the conventional elastic-perfectly plastic approach underlying models like Mohr-Coulomb and the classic Hoek-Brown is only a good fit for lower-quality rock masses. While this approach is routinely applied to better quality rocks, large differences between peak and residual strengths generate difficulties for engineers:

Both choices result in the under-utilization of the capacity of rock as an engineering material, which needs to be compensated with additional support and reinforcement measures. This limitation can be overcome if the actual softening/brittle behavior is considered, which is made possible by the new Hoek-Brown with Softening (HBS) model.

Varying the parameters that determine the shape of the post-peak branch, it is possible to go through varying degrees of strain-softening, from brittle failure (“critical softening”) to quasi-perfect plasticity. This can be applied according to two independent degradation regimes:

Modeling materials that undergo strain softening is always a challenge in the FE method. Softening failure develops through shear bands. These are highly localized plastic zones where deformations rapidly concentrate while the rest of the medium remains undisturbed, even unloading. Without further treatment, these heterogeneous deformations would lead to mesh-dependent numerical solutions, which are obviously not a good representation of the physical (mesh-free) reality. To restore the objectivity of the solution, a viscous regularization procedure based on Perzyna (1966) is applied. This makes the HBS model more stable and faster to converge than the classic HB model for highly non-associative problems (those where the dilatancy angle, y, is much lower than the equivalent internal friction angle, feq, defined by the Hoek-Brown failure envelope). 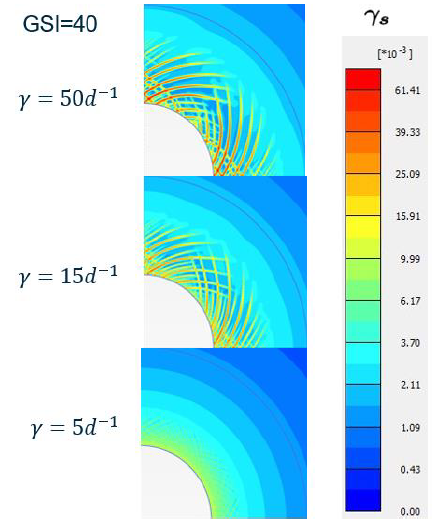 Creep can be defined as the viscous deformation of solids under stresses below their yield point. Creep develops in time and its speed is dependent on the temperature. As they approach their melting point, all rocks become viscous. Some, like argillite or rock salt, exhibit creep even at relatively low temperatures.

Creep can induce additional forces in the support and reinforcement elements, together with a changing distribution of stresses.

The Norton-based Double Power Creep (N2PC) model has recently been upgraded. It can now be used in two modes: either the previous visco-elastic formulation to model only the long-term effects of creep, or the new visco-elasto-plastic model with a Mohr-Coulomb failure surface, which also enables the consideration of the short-term effects. Additionally, in PLAXIS 2D, the N2PC model can also consider the dependency of creep from temperature.

Rocks containing clay minerals (like claystones, shales, or marls) or anhydrite are susceptible to swelling in the presence of water. Swelling is due to chemo-mechanical processes:

Swelling typically shows as heave at the bottom of the excavation or, in closed cross sections, lifting of the whole tunnel, but it can also result in collapse. Like most engineering challenges, it is much more cost-effective to prevent swelling during design than to mitigate once it appears. Designing for swelling rock commonly requires additional support, especially at the invert, yielding elements to accommodate the expected deformation, or downwards anchors to resist uplift. Repairing it on an existing tunnel often demands a full reconstruction of the swelling sections.

The Swelling Rock model can account for the presence or absence of water: only wet rock masses will develop swelling deformation.

According to Windsor and Thompson (1993):

Support and reinforcement elements can be modeled with components from the PLAXIS structural library. In underground construction, the Tunnel Designer also enables the quick parametric definition of patterns and construction sequence.

Reinforcement elements take the shape of 1-dimensional cables, bars, or poles. Although there is a wide variety of commercially available elements with different coupling systems, they all can be represented analytically either as point-to-point connection (unbonded length), a segment interacting with the surrounding rock (bonded length), or a combination of both. In PLAXIS, unbonded segments can be represented with node-to-node anchors and bonded segments with embedded beams.

Support elements typically take the shape of 2-dimensional shells or membranes, and occasionally of volumetric elements. In PLAXIS, rigid shells can be modeled with plate elements and flexible meshes with geogrid elements. Volumetric elements can either be modeled directly or through the thick lining feature in the Tunnel Designer.