How Many Different Kinds of Water Demands Are There?

A key input to a water distribution system model is the demand assigned to locations in the system. For most of the history of modeling and most models today, these demands are based on a known volumetric flow rate. Some, however, would argue that all water leaves the system through some kind of pressurized orifice and demands should be modeled as pressure-dependent. Software today, like OpenFlows WaterGEMS, has the ability to model demands as volume-based or pressure-dependent.

One side in this issue maintains that pressure in most water systems does not vary greatly, and therefore the effect of pressure on demand is less than the uncertainty in the demands themselves. While this is generally true, in intermittent water systems in developing countries, the pressure can vary from a maximum to zero hour-to-hour, day-to-day and instantaneous demand is completely dependent on pressure.

A good way to look at the problem is with a graph of flow vs. pressure, as shown below. Most modelers use the red line, where the demand is independent of pressure as long as the node is connected to a source. The red line can move up and down based on time of day and other factors, but is always flat. 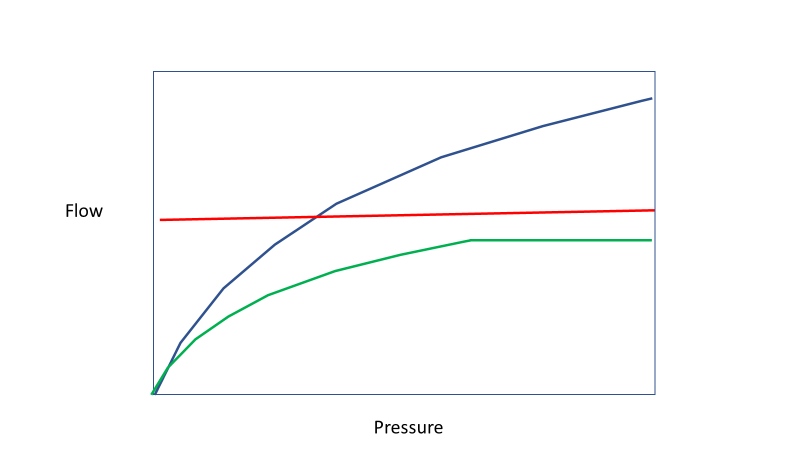 Those subscribing to pressure-dependent demand (PDD) say the blue line is correct. It is mathematically described by an orifice equation along the lines of

Where Q is flow, P is pressure, a depends on the size of the orifices assigned to the model node and b is generally 0.5, although there are cases where leaks can actually stretch the orifice size and b would be greater than 0.5.

Then there are those who say that above a certain pressure, demand is independent of pressure but up until that point, demand is a function of pressure. This is the green line above. In WaterGEMS, we call that point a pressure threshold. It is hard for me to think of any individual plumbing fixture that behaves like this, but this function can be useful for some studies.

The truth of course lies somewhere between these curves, and we may never know. With modern AMI meters that can measure flow and pressure to develop curves for individual fixtures, but a dishwasher is different from an ice maker, which is different from an irrigation sprinkler. So, how do you generate a curve for a customer?

The type of demand function depends on the type of orifice being used. A few years ago, Orazio Giustolisi and I wrote a paper attempting to classify all water demands (Giustolisi and Walski, 2012). After much discussion, we arrived at four different types of demands (if you count leaks as a demand). This paper has been widely cited since it was published. The four demand types are:

The answer to the question raised in the title is “four”. For any individual orifice at any given point in time, flow is dependent on pressure. However, modelers don’t know exactly who is watering their lawn or flushing their toilet at any given time. In most cases, volume-based demands can provide a reasonable approximation. The exceptions are situations where pressures will vary widely, which can include cases where the opening of an orifice can significantly affect the pressure at other nearby orifices.

For guidance on how to use PDD in WaterGEMS, see:  https://communities.bentley.com/products/hydraulics___hydrology/w/hydraulics_and_hydrology__wiki/2671/using-pressure-dependent-demands

Garbage In, Garbage Out

Recently, we’ve had some discussion on our Bentley’s Hydraulics and Hydrology communities forum on...

Everyone knows that pumps are used to lift the water up and over hills. So, nobody would want to...