As a follow-up to my recent general blog on pump energy, I read an article in Pumps & Systems magazine on what the author called “staging” of pumps (picking which pumps to run) (Ghotra, 2021). Picking the right number of pumps and which ones to run at any time without wasting energy is tricky. The problem gets especially tricky when you have the potential to mix constant and variable speed pumps, and there is no storage in the system, so you can’t simply run pumps efficiently and turn them off when a tank is full.

This problem ties in nicely to a paper I did with Enrico Creaco (2016), which looked at a wide range of pump configurations for closed systems (i.e., no tank). We found that it was more cost-effective to have multiple pumps in such a situation instead of one pump sized for peak flow and one backup.

Instead of the high-level view that Creaco and I took, I wanted to get into the nuts and bolts of why certain configurations were better than others. It just happens that I have the best collection of tools around for analyzing this type of problem sitting on my desk, OpenFlow WaterGEMS.

With OpenFlows WaterGEMS, I was able to quickly build a simple system with three different pump configurations in the pump station:

The underlying design criteria was that it was necessary to meet peak demand with one unit out of service. The peak demand from this pressure zone was 1000 gpm, but there was considerable variation across the day. The large pumps were sized to have their best efficiency point at 800 gpm, while the small pumps were sized with a BEP of 333 gpm. I used an energy cost of $0.10 /kwhr. I didn’t get into time-of-day pricing or peak demand charges to keep the problem manageable, even though OpenFlows WaterGEMS could have handled such considerations.

I ran 24-hour EPS simulations with 15-minute time steps and then ran Scenario Energy Costs to determine the energy cost. The results are summarized below:

The results were pretty much what I expected. The solution with the large pump required a variable frequency drive (VFD) to cover a wide range of flows, and there is no way, even with a VFD, for the pump to run efficiently over such a range. Nevertheless, this is the most common configuration I see in small to medium-sized stations.

Let’s look at what’s going on in that big pump to make it inefficient. First, we’ll look at how flow and efficiency vary over the course of the day. To view this type of graph in OpenFlows WaterGEMS, right pick on the pump and pick Graph. 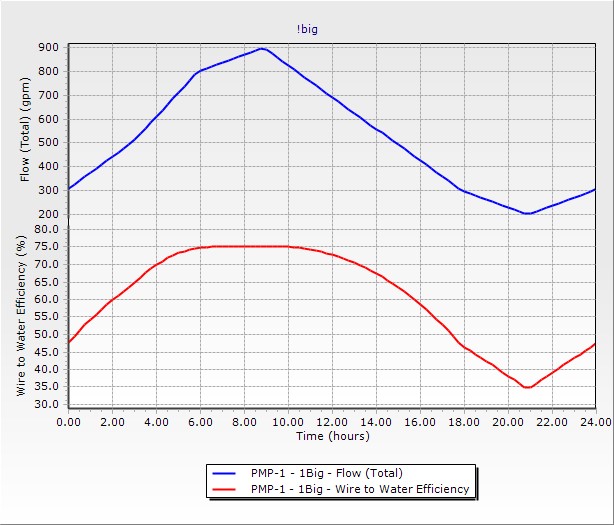 The pump runs efficiently during high-demand periods, but as the flows drop, the wire-to-water efficiency also drops.

Another way to look at this is with the pump curve option. In OpenFlows WaterGEMS, right-click on the pump and pick Pump Curve.

Even though the VFD tries to modify the speed to keep the pump efficient, the efficiency drops with demand.

Next, consider the system with four variable speed pumps. In this case, it is much easier to keep the pumps operating near their BEPs. However, there is some energy loss in passing the power through the VFD, which marginally increases energy costs. In OpenFlows WaterGEMS, having multiple variable speed pumps running together is handled as a “Variable Speed Pump Battery.” It assumes that the lead pump is constantly running, and the lag pumps come on as needed. The performance over time is shown below. With these three pumps, the efficiency never drops below 57% at its worst. 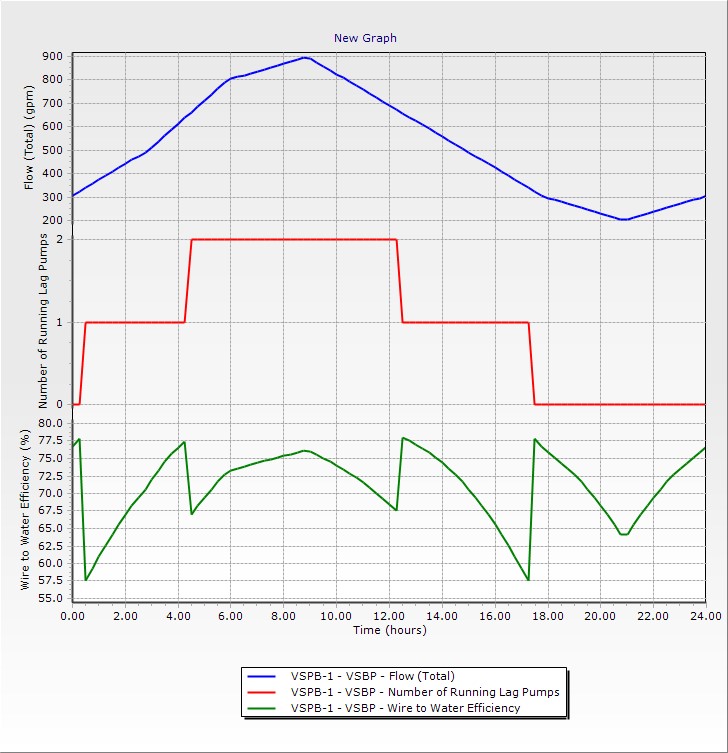 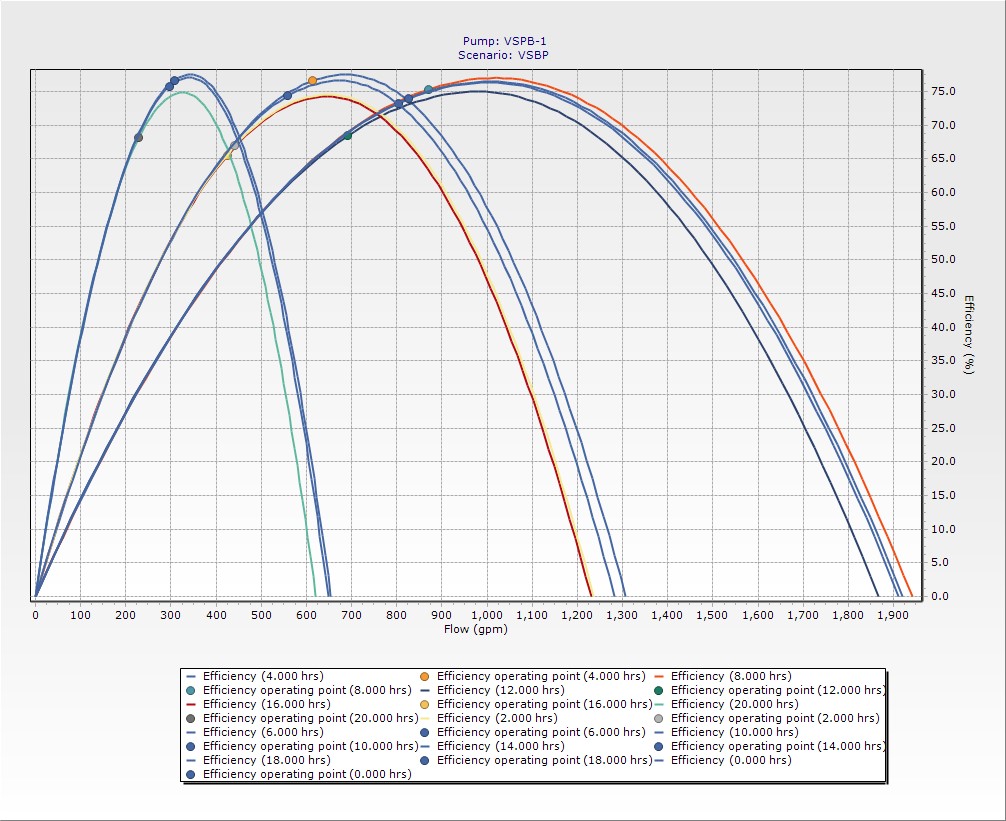 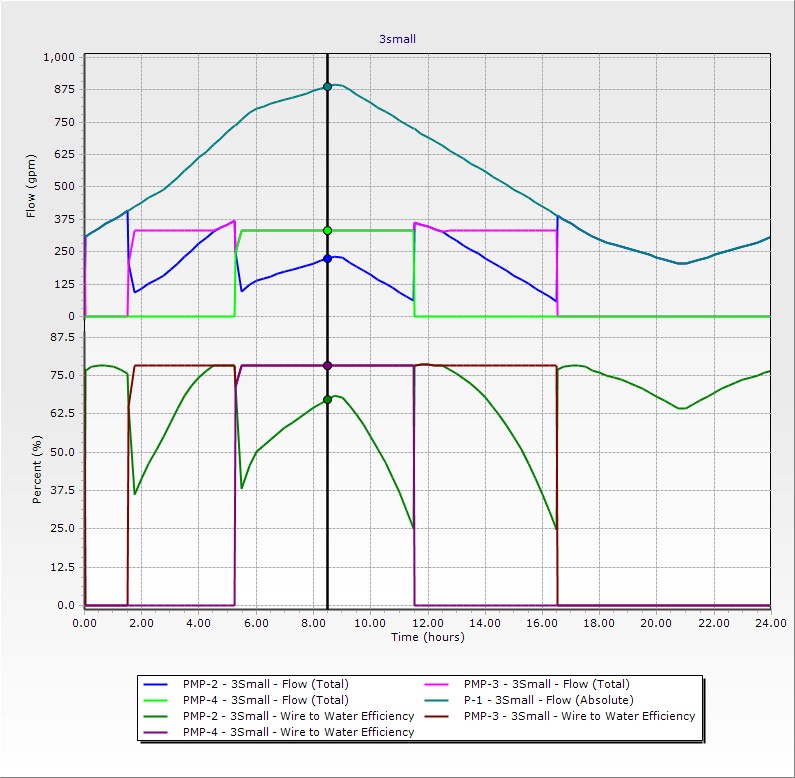 The potential downside of this solution is that there are more pump switches. This could get excessive if the flow hovers around one of the switching points. The response, in this case, is that when a pump switch is called for, there will be a delay before the switch occurs. The existence of the variable speed pump picks up the slack in pumping during this period.

Of course, this analysis only presented energy costs. Each of the alternatives also has a different capital cost for the pumps and VFDs. I don’t have current data at my fingertips for pumps and VFDs. But I do roughly know relationships between components as a function of size. So, if the large (1000 gpm) pumps cost $1C, the small pumps will cost around $0.5C, the large VFDs will cost $0.6C, and the small VFDs $0.3C. Combining the number of components in each solution, the two large pumps with VFD’s would cost $3.2C (i.e., 2x1C + 2x0.6C), while the four variable speed pumps would cost $3.6C and the one variable and three constant speed pumps would cost $2.7C. I realize these are very crude approximations, but the three constant and one variable speed pump configuration comes out best here.

There are many other factors involved in pump selection, but this blog hopefully points out the kind of analysis needed for energy and capital costs. My analysis was pretty quick. I’ll bet if I really spent some time on this, I could shave off a few percent from the energy cost for each option.

More importantly, OpenFlows WaterGEMS can make the energy cost analysis very easy. When I did calculations by hand or with spreadsheets in the old days, this was a tedious step (unless you incorrectly assumed that the pump would always perform at its BEP). With OpenFlows WaterGEMS, it’s possible to create all sorts of scenarios with different equipment, operating rules, and energy rates to arrive at the best solution with very little effort.

An important step in selecting pumps is developing the system head curve, which gives the head...

Who Put That Hill in the Way of Our Pipeline?

Pumps are great for lifting water uphill. But the uphill slope from the pump may not be uniform...