Momentum Transport Consultancy (MTC) is an integrated transport consultancy specializing in planning, modelling and analytics, and engineering. They offer a holistic approach to transport consultancy, based on understanding and integrating the needs of people, transport and movement to help realize and deliver design solutions. Their integrated team of planners, analysts, and engineers assess the impact across all modes of public transport, the highway network, and the pedestrian network through data analytics, pedestrian and highway modelling, and highway design.

The team was challenged with the task of simulating and predicting pedestrian movements accurately during several evacuation scenarios. The best way to accurately predict the effectiveness of multiple evacuation scenarios, including visualizations and understanding how pedestrians would interact with one another and their surrounding environment, was to use a pedestrian simulation tool. MTC selected Bentley's LEGION SpaceWorks for the project.

Another challenge was that the guidance and regulations on fire evacuation times were not clear enough to provide specific fire evacuation times. LEGION allowed MTC to see in real-time where people would be at different stages of the evacuation. This allowed the team to see whether the evacuation doors and exit routes were positioned in locations that ensured people could reach a place of safety in a reasonable amount of time.

Momentum supported the team led by BBBL on behalf of ‘Public Services and Procurement Canada’ to undertake a regulatory review of the Gilles-Marceau building in Saguenay, where the Revenue Agency offices are located. Part of the review included an assessment of fire evacuation scenarios, which was undertaken using LEGION SpaceWorks.
Momentum collaborated with the client and design team to determine three realistic scenarios of fire that would impact the movement of people evacuating the Gilles-Marceau building. These scenarios and a baseline scenario of evacuation without a specific fire location were modeled using the LEGION SpaceWorks software and were based on the worst-case occupancy of the building when the two employee shifts overlap. The evacuation time was obtained and compared to regulatory standards and guidance from the US and Europe to identify how the building performed and what changes would be required to the building layout to reduce evacuation timings.

This project aimed to review the existing evacuation plans and operations against regulatory standards. Since the previous review, the building population had increased and the internal layouts had changed, meaning that the existing emergency operation plan may no longer have been suitable. The aim was to use pedestrian simulation software to assess several evacuation scenarios and ensure the building design and layout could accommodate a safe and efficient evacuation for all users. The pedestrian modeling analysis results helped to inform the development of an operational plan for emergency procedures in the future context of the building.
LEGION allowed MTC to easily visualize and analyze the building’s evacuation as per the emergency procedure operation, evacuation times, and crowd densities throughout the building. Without a pedestrian simulator, this would have been impossible.

Using LEGION, MTC was able to ensure a safe and efficient evacuation from the Gilles-Marceau building. We could test multiple different emergency scenarios to ensure that a safe operational plan is in place and review the building layout to potentially save the lives of office workers in an emergency scenario.

LEGION Model Builder was used to develop and build the pedestrian environment in a 2D space, and to input and assign pedestrian demand data for all scenarios.

LEGION Simulator was used to run (simulate) the evacuation scenarios and then to visualize and analyze the pedestrian movements and simulation results. Using the Simulator, we developed videos and heat maps of the building’s evacuation. Heat maps were created, showing the time it takes the last pedestrian to leave an area of accessible space. This shows a snapshot image of the evacuation times for every part of the building.

"Without a pedestrian simulation (LEGION), this would have been impossible." 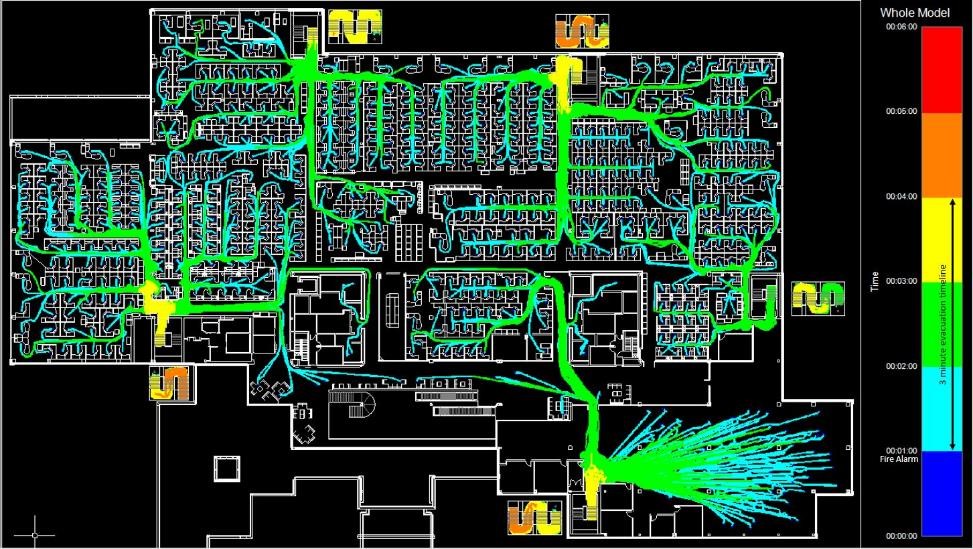 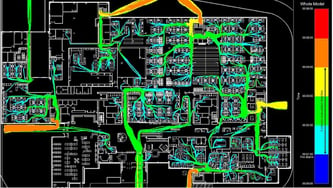