With the advancement of 4G and build-out of the 5G network occurring at about the same point of time for multiple carriers - and a significant percentage of carrier capital expenditure going towards micro cell sites to help densify urban population centers at the forefront of the industry - the macro telecommunications engineering industry has been shifting to cost sharing and thereby optimizing contracts between major carriers and tower owners.

Even though small cell build-outs are becoming more prevalent, due to the nature of the industry and expected explosion of 5G growth, it now seems more common for multiple carriers to have active applications for loading changes on the same tower site at the same time due to the volume of loading changes occurring. Tower owners and carriers are constantly requiring feedback from the structural upgrades at a site.

With this increase in cost sharing, and interest in multiple carriers co-locating on the same structure, there is also an increase in load cases and loading scenarios being requested during an analysis cycle. It’s not uncommon to need four or five loading and/or code combinations evaluated to provide cost feedback to clients and carriers. The combination of antenna changes and modifications that may or may not be considered can seem endless.

“The flexibility of a single model to check scenarios is one of the greatest
advantages of OpenTower. It allows us to provide our clients
as much feedback as possible to promote a long-term relationship.”

Many owners and carriers are also proactively analyzing towers to the most current code revision, regardless of the jurisdictionally adopted version of the IBC standards. Occasionally jurisdictions will not accept the most recent TIA standard, so engineers need to convert the model to the appropriate TIA version as referenced in the jurisdiction’s adopted standard. This can be both time consuming and cumbersome and can quickly cut into margins when there are multiple scenarios to evaluate. Unless set up properly, the data is less reliable and error-prone if multiple files need to be updated and modeled individually to capture all the possible loading combinations.

With multiple engineering firms working for large vendors, and multiple leg modification methods being utilized, Tower Engineering Professionals, Inc. (TEP) was constantly having to model and analyze various types of leg modifications. The built-in UPT/Custom Database in OpenTower proved useful in speeding up custom modification shapes that they routinely encountered. 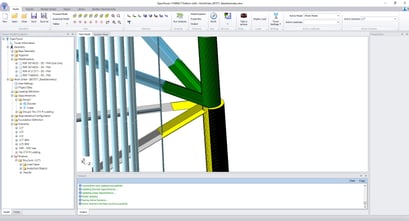 A common type of pipe or solid round leg modification was to install a piece of ½ pipe around an existing tower leg and weld it to the leg flanges. Intermediate connections were made either using U-bolts and backer plate or stitch welds. With their legacy software, Tower Engineering had to first draw these shapes in either AutoCAD or ShapeBuilder  to obtain the shape properties. Then go into their current software to manually input the sectional properties such as area, moment of inertia, radius of gyration, etc., in order for the programs to properly account for the weight and stiffness of the built-up legs in the analysis model. In OpenTower, the shape creation tool dramatically cuts down the time spent on this workflow. Now users can draw the same shapes in 2-3 minutes. Considering it previously took 10-12 minutes to draw several shapes in AutoCAD and then input the properties into the software, and most projects have 3 different size combinations, that’s a savings of 10 minutes a project. As an example project, TEP has analyzed one site on 16 separate occasions over the last 5 years and that equates to 400% time savings. In addition, calculating the Plastic Moment of Inertia using alternative software was either expensive or limited. In OpenTower it is automated. With more versatile input in OpenTower leg modification input parameters, many external calculations that TEP has been performing for leg modifications can be modeled in the software instead of manually updating externally.

TEP also appreciated OpenTower's file tree and scenario analysis tool. By setting up all scenarios in one file, the model can then be used as the basis for the site moving forward, ensuring that during the next analysis cycle, the loading can simply be updated, and new load combinations are readily available for review.

Engineers were able to quickly set up twenty scenarios (if needed) by inputting only a few wind definitions and properly labeling the existing, reserved, and proposed equipment during the initial model setup. With the feed line and discreet load modeling method used in the software, code changes were done by simply selecting the desired wind profile. This eliminated the use of multiple files and multiple changes within each of those files. As a result, they saved time and eliminated the need for rework. Similarly, when different loading combinations used the same design code, users were able to quickly select which carrier proposed loading to apply in the analysis and which carrier loading to leave off.

By keeping all modification designs in one file—with the ability to turn them on/off with the click of a button—TEP believes it could save 30 - 60 minutes per applicable site depending on the loading and modifications. Users will know their loading is correct, and they will no longer have to remove a set of modifications from a current run, check new loading, and then roughly verify that any software updates are fully accounted.

Likewise, OpenTower’s scenario tools will assist TEP to easily keep track of the multiple scenarios they need for each site and will greatly aid the reviewers, resulting in significant time savings for the QA/review process. In general, using OpenTower is estimated to save engineering firms, on average, 20% per project when utilized to its maximum potential.

The Crane Farm site, consisted of pipe legs and a combination of pipe, single angle, and double angle bracing. The tower utilized a mixture of K1 and x bracing styles along with sub-horizontals and split pipe leg modifications. Like most towers, multiple modifications were required over time. A mixture of member replacement, sub-horizontal modification additions, and split pipe leg reinforcement have all been installed to strengthen the tower in the recent past.

Instead of having to create a new file for each analysis cycle and continuing to use the old process, by using Bentley’s OpenTower, TEP was able to simply update the previous file’s results, as it does not require the creation of a new file. TEP also took advantage of OpenTower’s modification layers. Bentley’s OpenTower offers immense flexibility in analysis of designed vs. installed modification layers. This enables companies to capture contractor changes that affect tower capacity clearly in one single model.

TEP was able to copy the changes from the original design modification layer to the newly post-installed modification layer. If a wrong material grade was ordered, the horizontal grade can be adjusted from A572-50 to A36, and a new scenario was created utilizing the PMI modification layer instead of the design layer. Similarly, changes such as minimum edge differences and coping issues can be easily captured in multiple modification scenarios. OpenTower was then run to compare the new capacity to the previous scenario’s results, all within the same file. This reduced the potential for inadvertent errors when adjusting the tower’s geometry and ensured all PMI changes were captured in the most efficient way. So rather than determining what was changed in each file, clearly labeled modification layers all within the same OpenTower model allowed for changes to be tracked and accounted for in each future analysis. The full history of a site is available in one file tree at a glance. This helped engineers quickly and easily see the effects of a PMI change and report back to the client and contractor with required updates.

Engineers can set up all the scenarios seamlessly in one model, so all loading changes need to be changed only once and those changes will be reflected in any code or loading combination required. Other tower software requires a separate model for each code used or different wind speed, so the loading must be identically updated in each individual model if there is a loading change, or the same model must be constantly updated with new wind information and adjusted feed line and discreet load modeling.

"For sites that are analyzed repeatedly,
there is approximately 20% time savings."

This inherently leads to errors when updating multiple models. The time savings on the initial model run is likely to be less exaggerated on the initial model set-up, but with a strong trend of seeing the same tower site multiple times, subsequent runs will only require a loading update saving a substantial amount of time on the production side since the loading has to be changed only once.

Time savings and accuracy will also be observed on the QA/Review of the work. The load combinations will already be set up and checked. Unless there is a change in wind speed from the previous analysis, only the antenna/feed line loading input will be required to validate the accuracy of load combinations.

An additional benefit is the visualization of the model in realistic graphics. By taking advantage of the precision modeling paradigm, engineers can easily benefit from, and feel confident about, the accuracy of their model as it improves overall quality of tower structural analysis. 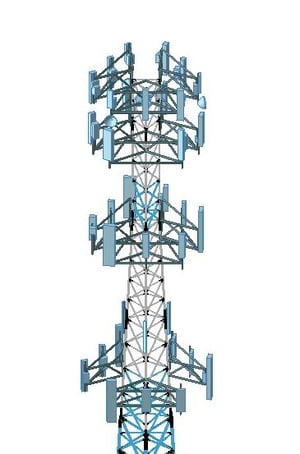 Just as the current consumer trend is to require more and more data availability due to streaming services and data consumption on mobile devices, so too is the trend of carriers and tower owners wanting more information available to aid in making informed decisions that end up having a significant financial impact on business models. The more information we can provide to the owners and carriers as an engineering firm without a delay in product delivery, the more valuable and sought after our engineering firm will be to the client.

Tower owners and clients want to quickly and accurately obtain feedback and load combinations from their engineering firms. This allows a quick review of the impact of a code change including the impact on structure capacity, and even possible benefits such as the effect of post modification inspection issues, which may affect the overall structure capacity.

Engineering firms are more willing to provide additional information without any increase in cost due to the ease of data manipulation within one file. Being able to obtain capacity increases from separate carrier installations allows both the structural owner and carrier to leverage the information to negotiate fair compensation for structural upgrades. Plus, it gives engineering firms the ability to ensure contractors are providing quality modification installations that maintain the target structural rating of the proposed upgrades.

One of the greatest advantages of Bentley’s OpenTower software is the flexibility of being able to check multiple scenarios in a single model, as engineering firms want to provide as much feedback as possible to their clients in order to create long-term relationships.

For engineering firms, owners, and carriers who want to minimize time while maximizing profits, OpenTower should be the software of choice. Users can reduce the amount of manual input required and the time it takes to perform analysis across multiple scenarios, which significantly improves the tower workflow. Since most carriers are constantly upgrading equipment on existing sites to upgrade to the next generation of technology, it's not unusual for 90% of these towers to have been analyzed previously.

While repetitive load case work and additional information drains profitability, the information is extremely useful to both tower owners and carriers. OpenTower provides a tool set that can help streamline the collection of data and enhance the accuracy of the information because the input and methodology is simple and replicable. For sites that are analyzed repeatedly, there is approximately 20% time savings.

For more information on the software used, please visit OpenTower.