This is the fifth in a series of articles on diaphragms. In the previous article I discussed the classification of Rigid diaphragms. The rigid diaphragm assumption is popular because it is easy to specify, provides a convenient method for distributing wind and seismic story forces to the frames, and analyzes quickly. In this article I will continue the discussion of Rigid diaphragms, highlighting some issues of concern that need to be understood and considered.

Consider a beam in a moment frame or braced frame. Because analytically the Rigid diaphragm is modeled as infinitely rigid, any two points on the diaphragm can translate and rotate, but the distance between them remains fixed. If both ends of a frame beam are attached to the Rigid diaphragm, the distance between them remains fixed; that is, there is no shortening or elongation of the beam – there is no axial strain in the beam. Since stress is a function of strain (stress = E times strain), if there is no strain there is no stress – which means no axial force. Of course this is wrong, in reality there will be axial force in the beams, but because of the Rigid diaphragm the analysis indicates zero axial force. This concept is important to understand because automated designs of these members won’t include an axial load component. This may not be significant for a moment frame beam that generally is only distributing the lateral forces to the columns; in compression the concrete floor slab may take a significant portion of that axial force, and in tension the beam may have sufficient additional capacity for the relatively small axial force. However, this can be a significant error for braced frame beams, especially for brace configurations in which the beam is a significant part of the load path in distributing the cumulative lateral force from the braces above to the braces below; these beams carry significant axial load but the analysis does not indicate that. This shortcoming of the Rigid diaphragm assumption can be rectified by selectively disconnecting some nodes from the diaphragm. For example, at each level consider disconnecting all but one of the nodes in each frame. Take care not to disconnect too many nodes, otherwise the forces will not get from the diaphragm to the frames. For chevron braces the node where the brace connects to the midspan of the beam should be disconnected from the diaphragm; the RAM Structural System automatically does this. 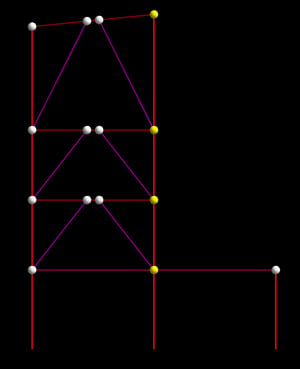 Note that this approach will likely be conservative because it may overstate the axial load in the beams, since in reality the diaphragm forces are transferred into the frame at all of these node points, not just one and then distributed through the beams.

Finally, it is important to recognize that when a diaphragm has been specified as Rigid, the slab openings and even the geometry of the diaphragm itself has no influence on the analysis results. Consider this model, for example: 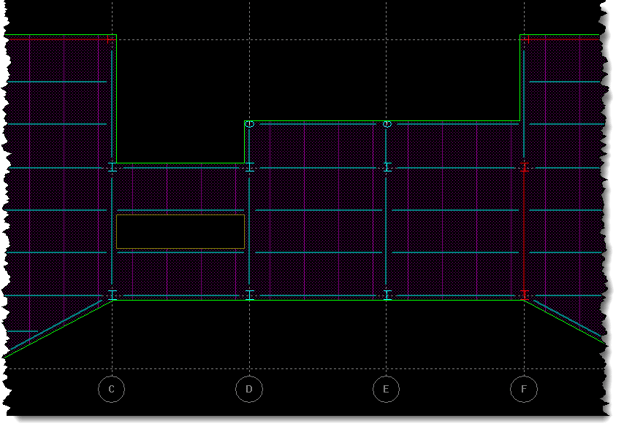 You would expect the opening and the narrow diaphragm to have a significant impact on the behavior of this structure. However, if this diaphragm has been specified as Rigid the opening and narrow width are ignored; the diaphragm doesn’t deform, the distribution of the horizontal diaphragm forces is based solely on the relative stiffnesses of the frames and their location. This could result in significant error in the distribution of lateral forces to the various frames, resulting in some frames being underdesigned and incapable of resisting the forces that they are likely to receive. This is the very reason why the building codes restrict the use of the Rigid diaphragm assumption; it is inappropriate for structures such as these.

Many diaphragms require more than simply being considered completely flexible or infinitely rigid. Often the actual stiffness of the diaphragm itself plays a key role in the distribution of the lateral forces to the various frames. The next article in this series is Classifying Semirigid Diaphragms.

Where Did Real-Time Modeling and Digital Twins Come From?

I recently returned from the 2022 AWWA Annual Conference. Two popular trends discussed at the...

In my previous post I discussed the definition of Flexible diaphragms, and their modeling and...

Characteristics and Modeling of Flexible Diaphragms

In my previous post I listed and briefly described the three types of diaphragms referenced in the...