Renewable energy is one of the most widely discussed topics today. If you read the news or scroll through LinkedIn, you’ll see many articles about renewable energy and the new projects securing funding or planning permissions, outlining the project will produce X amount of GW when in operation.

For centuries, the world has relied on fossil fuels to produce energy to heat our homes and power our transport, which has led to CO2 increasing year over year. In the Engineering.com article Keeping the Lights On in a Climate Emergency, Stephen Ferguson from Siemens Digital Industries states that 27% of the 51 billion tons of greenhouse gas emissions comes directly from electrical power generation.

We no longer have a choice. We must invest in structural analysis projects for renewable energy, and you can take this opportunity to make an impact!

The following graph highlights the extent of investments that large global oil and gas companies are making in the renewable sector. More than $30 billion was invested in wind and solar technology by these companies from 2015 to 2020. These companies are starting to take advantage of the opportunities that renewable energy offers. 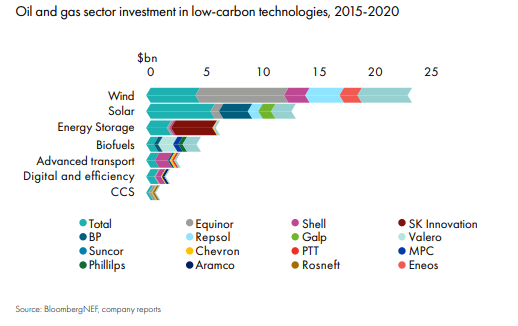 In October and November 2021, Glasgow hosted COP26, the 26th UN Climate Change Conference of the Parties. One of COP26’s key goals is to, “Secure global net zero by mid-century and keep 1.5 degrees within reach,” to which they outlined four objectives on how countries can help meet this goal:

To help achieve their first goal, another key goal is to “Mobilize finance,” with developed countries being asked to commit to $100 billion in contribution per year from 2020 to 2025. In addition, COP26 wants trillions of dollars in private and public sector to be made available to fund the objective of net zero by 2050.

Net Zero is a global issue and the world is united in how this goal can be achieved – through the use of renewable energy.

How to Get to Net Zero?

As part of this series, we will discuss structural engineering opportunities for solar, wind, hydrogen, and hydropower in more detail. 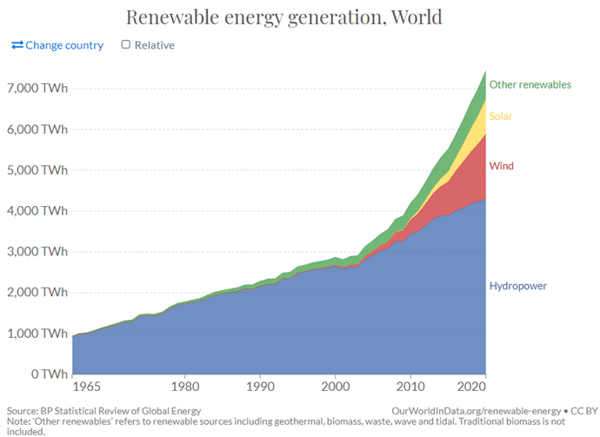 In the ScienceDaily article Accelerated renewables-based electrification paves the way for a post-fossil future, Gunnar Luderer, Professor of Global Energy Systems Analysis at the Technical University of Berlin, outlined that up to 80% of all energy demands is being met by the burning of fossil fuels, with the remaining 20% by electricity.

First, let’s look at solar energy. What are the main challenges and what can we look out for in the near future? 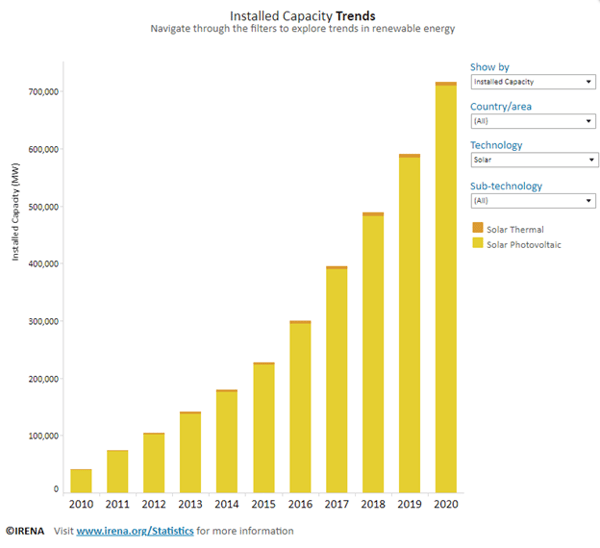 There is an unlimited supply of solar energy. There is, however, one significant downside. A solar farm/panel needs to be in an area where there is sufficient sunlight. The good news is that there has been an 85% cost decrease over the last 10 years, with PV systems becoming the most cost-effective offering. The preceding graph shows the results of those cost reductions.

There is a still a quite significant cost to the individual who wants to install a solar panel on the roof of their personal dwelling. In the US, they are tackling this issue with community solar projects across 22 states plus Washington, D.C. that have put policies in place. This allows communities to benefit from shared solar power and individuals to personally contribute to COP26 goals.

While making solar power more available through community solar projects can make a huge impact, being able to offer storage for larger solar farms is becoming absolutely crucial. This allows for energy to be stored for demand peaks. And during low demands, solar energy created is not being wasted. This method also applies to offshore wind energy.

The emergence of promising technology for floating solar photovoltaics (FSPV) will allow for further options when constructing large solar farms. Floating solar farms can work separately or with hydro renewable energy, and tie into existing substation and transmission infrastructure.

The second source of renewable energy to be addressed is wind. Wind farms capture the energy of wind flow by using turbines and converting it into electricity.

Again, there are drawbacks with wind as a source of renewable energy. Wind farms, both onshore and offshore, are often built in remote locations. The energy generated by these large turbines needs to be transported long distances, which results in higher costs.

Flip them around and you have the disadvantages to both onshore and offshore wind energy.

In the Supergen ORE Hub presentation Overview of Floating Offshore Wind, Walt Musial, Offshore Wind Lead at the National Renewable Energy Laboratory, outlined that 80% of offshore wind resources are in waters greater than 60 meters and believes floating wind technology is expected to be at deployed at utility scale by 2024.

The market for offshore wind has grown from 2.2 GW in 2016 to 6.1 GW 2020.This is a growth of 28.5%, and Global Wind Energy Council (GWEC) Market Intelligence believes the global offshore wind market will continue to grow at an accelerated pace. 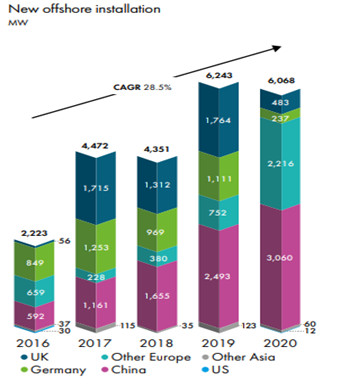 The following graph outlines that by 2040, Carbon Trust believes up to 70 GW worldwide will be produced from offshore floating wind turbines.

Lastly, let’s turn our attention to hydrogen. Hydrogen needs to be combined with other elements, such as oxygen, to make water, as it does not occur naturally as a gas on its own. When hydrogen is separated from another element, it can be used for both fuel and electricity.

A key benefit of hydrogen is that it can be used for fuel cells, which can then be used for powering an electric motor. The drawback is that it needs energy to be produced.

Deloitte in its 2022 renewable energy industry outlook identified some key trends, and one of those is green hydrogen. According to Deloitte, “These technologies can provide zero-carbon electricity and longer-term seasonal electricity storage, ease grid congestion, stem renewable curtailment, boost reliability, and facilitate integration of solar and wind into the grid while supporting goals for 100% clean energy.”

We discussed earlier that one of the drawbacks of hydrogen is that it requires a lot of energy to produce it. With the renewable energy market expecting to accelerate, and its production costs decreasing, this will allow green hydrogen to be produced in hydrogen plants much more easily and affordably.

A market to watch for hydrogen is Chile. Chile is the world’s largest copper exporter, with energy-intensive mining processes. Chile presented its National Green Hydrogen Strategy in 2020. An action plan was drafted to accelerate green hydrogen production to 5 GW by 2025, and produce the world’s cheapest green hydrogen by 2030. As a result of this, there are several pilot projects in the making from the larger copper producers in Chile, such as changing to hydrogen-powered trucks. In addition, copper-producing companies are using hydrogen to replace diesel and natural gas in the copper obtaining process.

The National Law Review: The Results of COP26

Just Energy: 7 Types of Renewable Energy: The Future of Energy

Allen Adams serves as Distinguished Engineer at Bentley Systems. At the 2022 NASCC Steel...