Learn what support optimization is and how it can not only save you hundreds of design hours, but reduce hardware, installation and operational costs.

The integrity and safety of pipework systems relies heavily on the correct support arrangement. Pipe supports come in many different types, each performing a specific job necessary for the safe operation of the system. They can be very simple e.g. a pipe resting on a beam, where only the weight of the pipe is supported. Any lateral or axial loads would only be restrained through friction, the amount of which is dependent on many factors and hard to predict accurately and vertical upward loads would be unrestrained completely allowing the pipe to 'lift off' the support beam. They can also be more complex e.g. constant force hanger that provide a constant vertical force over large movements or snubbers/dampers that only function in dynamic events absorbing the abrupt displacement and energy from events like earthquakes in a specific direction. Added to this, supports can be linear, bi-linear and non-linear having different characteristics that the pipe stress engineer needs to understand.

Under the various loading events a plant might witness during its operating life, the piping arrangement and support configuration must be able to resist the loads on them according to a specific design code such as ASME B31.3. These design codes have requirements to consider stresses under sustained, occasional, expansion, fatigue loads, and the support configuration is highly influential on the magnitude of these stresses. Added to the difficulty is the fact that in general supports for sustained and occasional reasons are detrimental to expansion as they require restraint whereas expansion should be unrestrained to minimize the stress. Other considerations are sensitive equipment nozzle loads, deflection limitations, support capacities etc.

Many systems can be supported by experience or using well defined rules, but as systems become more intricate and more contorted or loads more severe, the complexity of the problem becomes orders of magnitude harder and more time consuming to manually iterate to a solution that satisfies all the criteria.

Support Optimization automates the manual process and can evaluate many thousands of solution options in less time.

A simple 'brute force' approach is possible, but this is not the best and there is a need for a more intelligent algorithm that utilizes machine learning to learn from failure; the AutoPIPE Support Optimizer uses a Genetic Algorithm. Genetic Algorithms are inspired by Charles Darwin’s theory of natural evolution and the survival of the fittest. The process starts with an initial population of solutions that evolve through generations inheriting genes from their parents, the weaker solutions are penalized and the fitter solution survive and continue to evolve in further generations. The Support Optimizer is constantly learning from the failures making the iteration process much more efficient.

The Support Optimizer considers all the conditions that affect the results including the geometry (stiffness and properties), code requirements, support (types, limitations and cost), loading conditions and the potential support locations and considers each and every combination and configuration within the optimization parameters of population size and non-improving generations that control the process and when it will stop. In general, but not every time, a smaller population size would mean quicker convergence but less diversity a larger population size would mean more diversity but a slower convergence. So increased diversity will produce more solutions at the expense of run time, but reduced diversity could completely miss the best solution so there is a balance that is required.

Once complete the solutions generated are listed in relative cost order for easy selection and review. The Support Optimizer will favour a less expensive arrangement with more supports over a more costly one as cost of support assembly is one of the optimizing criteria. The Support Optimizer can consider far more configurations in only minutes that manually would take days. Helping the User to efficiently complete the analysis knowing that they have the most optimal support configuration that is the most cost effective from a hardware point of view, but also reducing the installation and through life maintenance costs by having fewer supports. 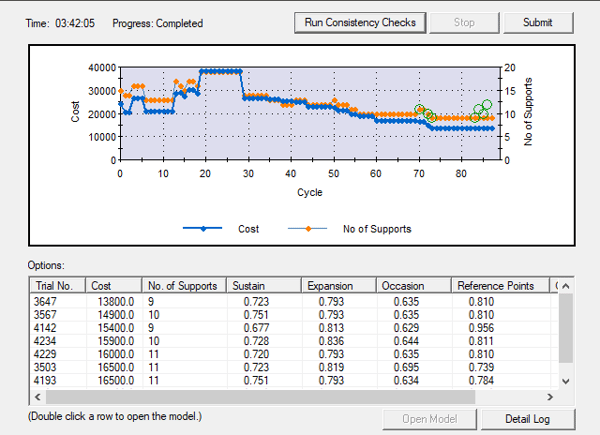 In this real-world heat exchanger system example with tight piping arrangement and quite restrictive nozzle loads and starting from a support arrangement that is a solution already, we can run the Support Optimizer and find many more solutions that the User would not have considered. In less than four hours, the Support Optimizer considers over 4000 possible scenarios (see solution progress graph above) and determined that the most optimal solution had 10 fewer supports (including 6 fewer expensive springs) and would have a relative cost of 50% of the starting solution. The time needed to consider so many scenarios manually would be huge and impractical, so this automated tool can add significant value on any project. Already our users have found it helpful at eliminating certain layouts and are building it into their design processes. 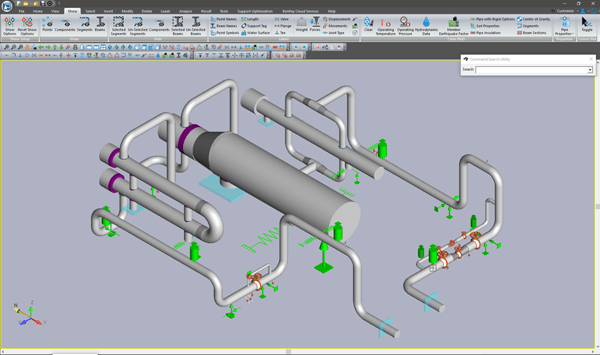 Since engineering and construction company CDM Smith’s adopted OpenGround, they can leverage a one...