The term ‘soft soil’ is associated with fine-grained soils (mostly normally-consolidated clays). Here in The Netherlands, clays often include organic content, and we have organic peats as well, which are even softer. In other countries, clays may be very different from ‘our’ soft soils, such as the Norwegian ‘quick clays’ with a very high sensitivity. There are also natural clays with a high degree of ‘structure’ and ‘anisotropy’, which behave again differently, or clays that are ‘expansive’, so sensitive for swelling. Hence, you must be careful in choosing the right constitutive model for a particular ‘soft soil’ in your finite element applications.

In general, you can rely on the Soft Soil model as a good model in case you are dealing with (near-) normally-consolidated clays, provided the soil is not too specific or problematic. The Soft-Soil model distinguishes between primary loading behaviour and unloading or reloading below the pre-consolidation pressure. The model uses an isotropic compression index and swelling index as model parameters, which can be related to the well-known compression index Cc and swelling (or recompression) index Cs (or Cr) as obtained from one-dimensional compression tests. The Soft-Soil model’s best performance is obtained in primary compression, since unloading is modelled as elastic behaviour. 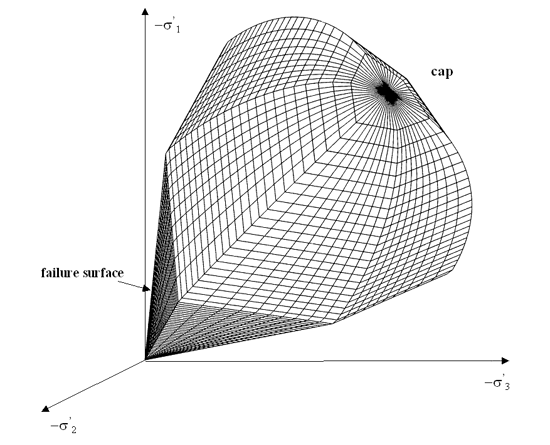 When compared to the Mohr-Coulomb model, the Soft-Soil model includes more features of soil behaviour and is much more realistic. However, in comparison with the Hardening Soil model, as described in my previous blog, the Soft-Soil model has lesser features, but it has been developed more specifically for soft soils (as the name suggests).

The Soft-Soil model includes two parameters to characterise its stiffness response in primary loading and unloading or reloading. These parameters can easily be obtained from standard lab tests: the one-dimensional compression test or oedometer test. This test will also provide the initial pre-consolidation pressure that is used to initialise the model’s stress state. Alternatively, correlations may be used to obtain these parameters from field test data.

Besides the compression parameters, the model has basically the same parameters as the simple Mohr-Coulomb model. That makes the Soft-Soil model probably easier to use than the Hardening Soil model, at least for soft soils.

Soft soils are known for their low hydraulic conductivity (or permeability). During short loading of a soft soil, the pore pressure increases as a result of an undrained response. Consequently, the effective stress reduces rather than that it increases, which has consequences for the maximum shear resistance that can be obtained.

The correct prediction of pore pressure development, reduction of mean effective stress and, consequently, the undrained shear strength, are essential in calculations where stability is be an issue. A simple model, like the Mohr-Coulomb model, can be dangerous for soft soils, since it may dramatically over-estimate the undrained shear strength. The Soft-Soil model is the preferred choice in such applications, as it provides a much more realistic stress and strength response in undrained loading. 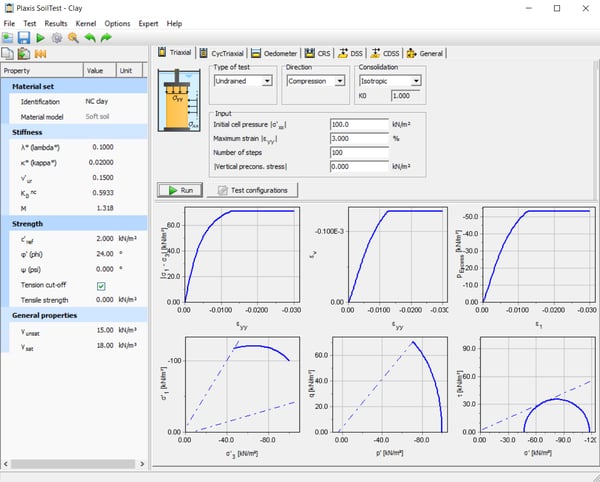 Although the order and timing of construction stages or loading schemes are relevant for all non-linear elastoplastic models, most soil models are time-independent. Having said that, time can play an important role in soft soils. On the short term, soft soils behave undrained and generate pore pressures, while on the longer term these (excess) pore pressures dissipate, causing further settlement. After all excess pore pressures have dissipated, soft soils may continue to deform as a result of creep, which is often referred to as ‘secondary compression’. Creep is not included in the Soft-Soil model, but there is a separate model that does include this feature: The Soft-Soil Creep model.

The Soft-Soil Creep model has basically the same parameters as the Soft-Soil model. The only extra parameter is the Creep Index, which can also be obtained from one-dimensional compression tests, when the applied stress is kept constant for a longer time.

Ready for your advanced analysis on soft soil?

With this information, I hope to have encouraged you to use the Soft-Soil and Soft-Soil Creep model for (near-)normally-consolidated clays in your practical geotechnical applications. Model parameters can be easily obtained from standard site investigation data. A finite element analysis using the Soft Soil model is more accurate and realistic than when using a simple model, at least when dealing with soft soils. And, more importantly, it provides a safe solution when stability is at stake.

On the Importance of an Appropriate Soil Model

In my previous blog I mentioned the importance of using advanced soil models for your geotechnical...