Think about the plumbing in your house. If you want to make any changes to the piping, you need to shut off the entire house because you usually don’t have isolation valves in your home plumbing. The same is true for large water distribution systems. If they didn’t have isolation valves, a single pipe break could shut down the entire system. The three most important keys to providing resilience to water distribution systems are valves, valves, and valves.

Valves are not inexpensive. Utilities want to wisely invest in valving. In the past, valve placement was analyzed using rules of thumb based on the spacing of valves or the number of valves at an intersection.

Early researchers on reliability and resilience, using models, tried to simulate pipe breaks and their associated shutdown by closing or removing the pipe from the model. At first, this sounds logical but as you look closely, it becomes apparent that this can be misleading.

Consider this piece of a distribution system. (Pipes P-1 to P-6 are larger, more important pipes.)

Suppose there is a pipe break in pipe P-8 which is part of segment S-6. Simply removing P-8 from the model would provide a poor representation of the impact of that shutdown on system. Modeling distribution shutdown requires knowing where the valves are.

Another way to visualize segments is to think of each segment as a tub of water connected to other tubs by valves. The figure below shows the system above in this way. Segments are circles, and valves are lines. 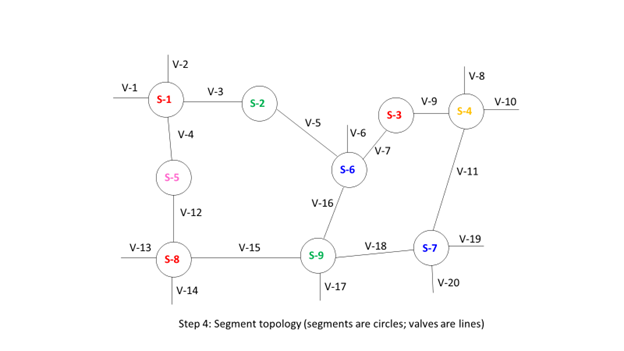 From this representation, it’s clear to see that losing segment S-6 is going to make it much more difficult to get water from S-1 to S-4 and beyond. Sometimes losing a single segment can put a major portion of a distribution system out of service. In some cases, identifying a critical segment and installing a single valve can significantly improve system resilience.

The Concept of Segments

It took a while for the concept of segments separated by valves to catch on. Some respected engineers still don’t appreciate segments. A nice AWWA Research Foundation study by Deb, et al. (2006) demonstrated the value of using segments.

In the early 2000’s, we created a feature in WaterGEMS, Segments and Criticality, which would automatically identify segments, shut down each one in turn, and determine the impacts of those shutdowns. We published a paper (Walski, Weiler and Culver, 2008) demonstrating the use of this feature in a medium sized city.

Over the years, numerous researchers have contributed their improvements to this approach, such as Alvisi, Creaco, and Franchini (2011), Creaco, Franchini, and Alvisi, (2012), Giustolisi (2020), Giustolisi and Savic (2010), and Jun and Loganathan (2007). We did a paper (Liu et al. (2017) on what happens when a valve fails to operate (hint: the segments are merged together). This helps to identify key valves needing special attention.

Most engineers do a good job placing valves when systems are designed. However, systems evolve over the decades, and a large segment in a semi-rural area may evolve into the hub for numerous branches such that a single break in that segment will deprive service to a shopping mall, three restaurants, a school, a fire station,… Analyzing segments and criticality can point out such vulnerable segments before they make the evening news.

Am I obsessed with valves? Yes. Somebody needs to speak up for the poor, defenseless appurtenances that save our water systems every day. They need some love and exercise.

And I’m not done yet. Noha Abdell-Mottaleb and I just had a paper accepted for Journal of Water Resources Planning and Management that is a bit of a rambling paper covering some practical tips for identifying vulnerable and important segments, how to automatically generate diagrams like the fourth figure above, and some theoretical work on applying graph theory to understand valves and segments.

If you want copies of my papers below, submit a comment.

To get more in depth information on this topic see:

Walski, T. M. (2011). “How many isolation valves are needed in a water distribution system?”
Urban Water Management: Challenges and Oppurtunities-11th International Conference on
Computing and Control for the Water Industry, CCWI 2011.

Flow control valve (FCV) elements are the most abused elements in WaterGEMS/WaterCAD. If I had my...

An important step in selecting pumps is developing the system head curve, which gives the head...