Water utilities everywhere struggle to reduce real water loss using a variety of tools from acoustic leak detection, to water audits, to pressure anomaly detection, to ground penetrating radar, to pressure management. Each of these addresses a portion of the problem and there is no single perfect solution.

That is the fundament concept behind district metered areas (DMA) which are now widely used in some systems to monitor unusual demands that are generally caused by leaks. A DMA is a portion of a water system for which all inflows and outflows (and variations in tank water volumes if there are tanks in the DMA) are monitored.

One way to get a better understanding of water loss and identify where to place resources is to track flow through the system. DMAs that appear to have high water loss can receive more attention in water loss reduction programs. To understand where water loss is high, it’s necessary to install flow meters and subdivide the system into DMAs.

Why aren’t there more DMAs?

There is the cost of installing flow meters and connecting them with the SCADA system. There are potential adverse impacts in hydraulic performance such as the need to close some feeds to the DMA which can reduce system resilience and fire flows.

And then there is the problem of identifying where DMAs can be constructed. The pipes within a DMA should be highly interconnected with one another, while being only weakly connected with the rest of the distribution system. In areas with a tight grid and no or few pressure zone boundaries, DMAs may be very difficult to identify and create without the need to close a large number of valves. Add to that the self-imposed constraint of creating DMAs of roughly the same size, and creating DMAs can be challenging.

Instead of thinking about “designing” DMAs, it is better to think in terms of “discovering” DMAs that have been created by natural boundaries and the evolution of the system itself. While pressure zone boundaries make good DMA boundaries, many of the best boundaries have little to do with the hydraulics of the system. Instead, they are made up of water bodies, railroad tracks, major highways and political subdivisions that limit the connectedness between clusters of pipes in the distribution system.

Algorithms such as those in WaterGEMS find those parts of the distribution system that are highly clustered. These clusters are likely candidates for DMAs. But automated results need to be analyzed and possibly modified using engineering judgement. It may be necessary to close a large number of valves to isolate two DMAs in a highly gridded system. Instead, the engineer can choose to merge those DMAs into a single DMA even though the resulting merged DMA may be larger than desired. The goal is to produce a reasonable set of DMAs as shown below.

The engineer can zoom into these system-wide images to identify which valves should be close and what would be good meter locations. To quantify the impacts of DMAs, WaterGEMS can readily calculate the impact of DMA creation on pressures and fire flows. 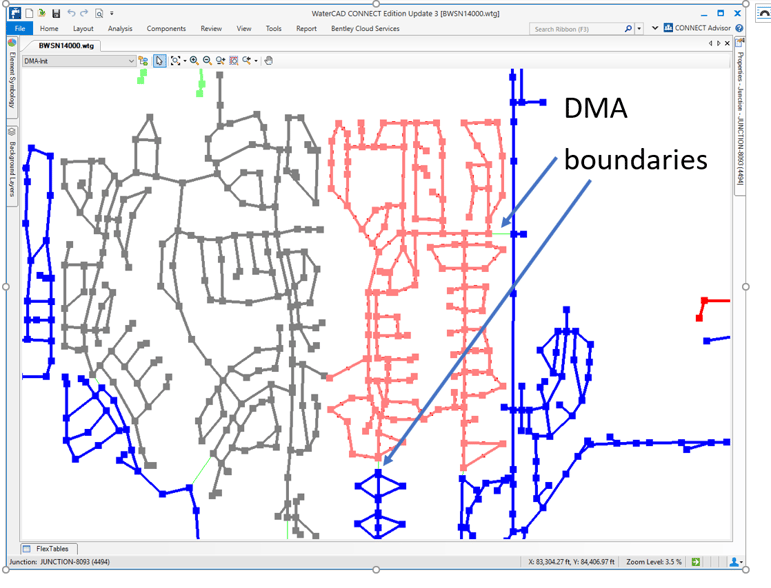 Transmission mains may also cause problems as their role is to move water across the system and closing any isolation valves would prevent the transmission main from doing its job. Customers served directly from that pipe would not be part of any DMA.

Then there are areas that don’t constitute good DMAs. A 10 house subdivision off a large transmission main may look like a ready-made DMA but the cost of installing a system flow meter for 10 homes may not be justifiable.

A wholesale water customer (e.g. a neighboring rural water district) may also be a nice natural DMA since it is already metered, even though the supply utility may have little control over the operation of that customer.

The WaterGEMS DMA tool may need to be run several times to identify the best collection of DMAs. First, smaller, easy-to-find DMAs can be created and locked down. Then larger DMAs may need to be formed. In some cases, there may be a large DMAs that simply cannot be further isolated without having serious consequences in terms of system hydraulics.

There are other issues besides hydraulics in designing a DMA system. Some include, the exact location, size and type of meter, power to the meter vault, connecting into the SCADA or IIoT system, and installation of pressure and water quality sensor since once you start installing meters, you might as well install some other sensors.

There are other options in creating DMAs such as “virtual DMAs” where only some of the inflows are measured and other inflows are determined by modeling.

DMAs can’t patch leaks by themselves, but they can point to locations needing attention and that can make leak detection and repair more efficient.

Back in 2001, before Haestad Methods was acquired by Bentley Systems, John Haestad had the idea of...

What Happens when the Pressure Gets Really Low?

In most of our water distribution modeling, we use a demand-driven approach. The user enters a...

How Many Different Kinds of Water Demands are There?

A key input to a water distribution system model is the demand assigned to locations in the system....