Although PLAXIS has its roots in soft soil, it is well equipped for finite element analyses in hard soils and rocks. In addition to dedicated facilities for the modelling of tunnels, rock bolts and field stress conditions, it includes the necessary constitutive models to simulate the behaviour of various types of rock.

• Rock stiffness is significantly higher than soil stiffness and barely stress-dependent.
• Rock strength is significantly higher than soil strength; mainly the cohesive part of strength; and it increases less-than-linear with the stress level.
• Rock behaviour is often anisotropic; both in terms of stiffness and in terms of strength; it is highly influenced by its geological history which may have introduced wear (weathering), fissures, cracks, joints, faults and other irregularities or discontinuities.
• Rock deformations can be time-dependent (creep), but very different from creep in soft soils.

It is important to note that rock behaviour (even the same rock formation) can vary a lot from one place to another, because of local irregularities. When taking an (intact) rock core sample and test it in the lab, the measured properties are generally more favourable than those of the rock mass. Therefore, field investigation is necessary for the determination of representative rock properties.

The Hoek-Brown model cannot explicitly deal with discrete systems of joints and fractures which could introduce significant anisotropic behaviour in the rock mass. If your project involves rock that has well defined discontinuities, the Jointed Rock model is more appropriate for such rock. The stratification direction (and other predominant failure directions) can be modelled by means of the so-called ‘dip’ and ‘strike’ parameters. 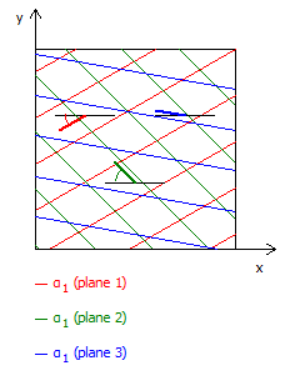 The standard Jointed-Rock model in PLAXIS is linear elastic perfectly-plastic. Plastic deformation can only occur in the predefined failure directions. This means that the rock matrix is considered linear elastic (unlimited shear strength), which may be regarded as a limitation. In case you would like to define the rock matrix as an elastoplastic material, there is a user-defined model available that has this capability, which is the ‘Isotropic Jointed Rock with Mohr-Coulomb Failure Criterion’ model.

Besides the standard rock models in PLAXIS, there are a couple of user-defined models available that include special rock features. The N2PC Rock Salt model, which is a Norton-Based Double Power Creep Model (Bui et al., 2018), is a model that is meant for salt rock and other types of rock that involve time-dependent creep behaviour. It can be used for deep underground projects in the mining and petroleum industry such as energy storage and gas extraction. In combination with the in-built thermal capabilities in PLAXIS 2D Ultimate, the creep in the N2PC Rock Salt model can even be defined as temperature-dependent.

The Swelling Rock model (Schädlich et al. 2013) is another user-defined model that includes a special rock feature: Swelling. A typical example where this model may be used is in the case of a tunnel project in anhydrite rock. If the anhydrite gets in contact with water, it may swell in time up to 60% in volume. This may cause significant additional stresses or deformations in the tunnel lining. With the Swelling Rock model and its tunnel modelling facilities, PLAXIS is well equipped to perform such analysis.

As you have seen in this blog, PLAXIS does not only include facilities for geotechnical analysis in (soft) soils, it also has the capabilities to perform accurate finite element calculations for complex projects in rock. The efficient workflow in combination with its robust constitutive models makes PLAXIS the ideal tool for projects involving rock stability, tunnels, deep underground (energy) storage and many more. So, start your rock analysis with PLAXIS today, and you will find out that it is as good for rock as it is for soil.

In my previous blogs, I discussed various constitutive models for modelling the stress-strain...